2.4 billion people, every third person in the world, is a Facebook user. Within 15 years, the technology group has succeeded in creating what government intelligence services can only dream of: a digital profile of one third of the world’s population, including their real names, movements and private interests. It is the largest private database in the world.

Ten reasons why Facebook’s Libra is a bad idea 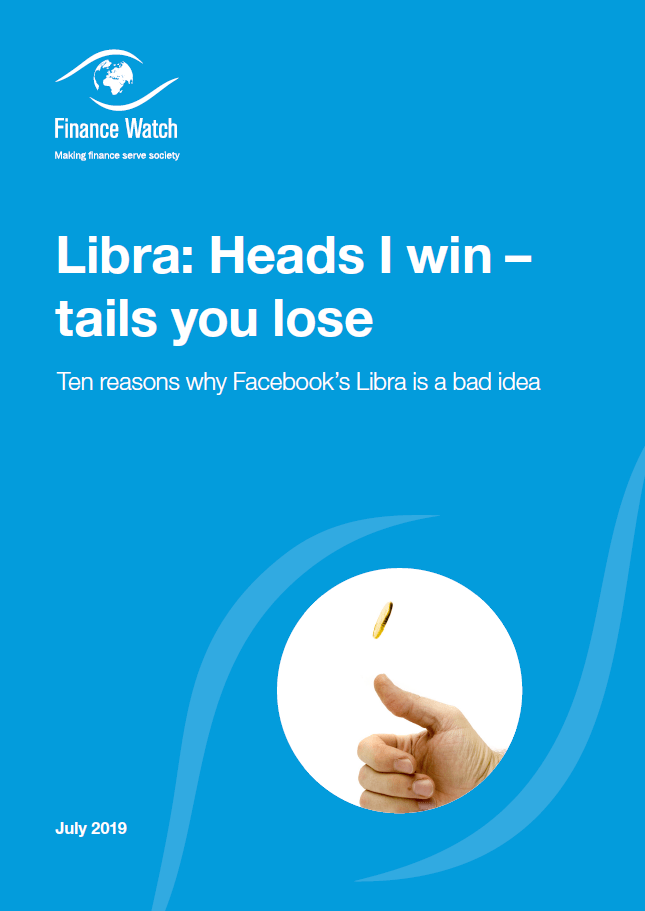 Now the tech giant is taking the next step: with the planned introduction of its „digital currency“, Libra, Facebook wants to penetrate the last area of our privacy. “Faster, more convenient and cheaper” – these are the promises Facebook is using to drive its latest mega-project forward. In addition to news, the group intends to send digital payments around the globe, via its own payment system and its own unit of account. It is presented as a benefit for 1.7 billion people for whom Facebook promises easy access to payment transactions.

Facebook is already a huge data leech today. The power of the big tech giants is already almost uncontrollable. If access to sensitive payment data is added, each and every one of us, as a society, will become dangerously dependent – even our dependence on big banks is less dangerous compared to that. We must prevent this from happening!

It is true that many politicians and financial supervisors see the risks. But warnings and shy regulatory proposals are not enough. Once Libra has been introduced, Facebook’s strategy is to quickly establish it and thereby increase its power – true to its corporate motto: “move fast and break things“.

That is why we demand from the President-elect of the European Commission, Ursula von der Leyen, from the current President of the European Central Bank, Mario Draghi, and from his sucessor-candidate, Christine Lagarde: Stop the private currency Libra before it comes onto the market. Stand up to Facebook and limit its rampant power!

These are the main reasons why we want to stop Libra:

Facebook already possesses a gigantic data treasure because it systematically collects personal data – from musical tastes to personal contacts. Our data is marketed as profiles to advertisers.

Facebook tries to reassure everyone that it would respect the privacy of customers, even if it gains further sensitive payment information through Libra. In order to prevent conflicts of interest in data protection, an organizationally separate subsidiary called Calibra would be responsible for financial services.

But experience tells us otherwise. Facebook promised similar safeguards before and then exchanged data with WhatsApp in order to gain more precise – and thus even more lucrative – user profiles.

What can prevent Facebook from doing the same in the future? One thing is already clear today: regardless of whether Facebook, as announced, actually maintains a strict separation between social networks and payment data or not, the corporate squid will always seek to hoard more data.

User risk: the value of the Libra is by no means certain

Libra would be safe, promises Facebook. The principle: users should be able to trade Libras as they do Euros on exchange platforms.. The value of one Libra is determined by a basket of reference currencies which is made up of shares in real currencies such as the euro, dollar and yen – and fluctuates with them. The exchanged money is invested in the “Libra Reserve”. Thus each Libra is invested in financial assets – mainly bank deposits and short-term government securities, according to the Libra White Paper.

Experts such as the German economist Peter Bofinger warn against considering the Libra to be as safe as established world currencies. While the euro, the dollar and the yen are supported by their central banks, the Libra Association is merely a limited liability company. It only promises to keep the Libra stable, but is under no obligation.

In the event of a crisis, if it proved costly to support the Libra with fresh capital, its private owners could simply walk away. For users, this means they could lose all their money. But it does not have to go that far: Even a sudden fall in the share price is enough to expose users to significant losses. This could happen because the Facebook Libra is a „virtual currency“ and not legal tender: no bank and no trader has an obligation to accept a private currency like Libra.

Thanks to Libra, Facebook, Uber & Co. would have a private money monopoly

What starts as a non-profit organization will soon give way to hardnosed profiteering. Facebook and many of its Libra partners are private companies whose goal is (and is allowed to be) to make money. Unlike central banks and governments, they are not subject to public scrutiny and accountability. In this respect, the Libra could develop into a powerful, completely private and completely uncontrollable money monopoly.

According to economists’ initial estimates Libra will probably function like a huge money market fund. This means that those who exchange euros for Libra will – technically speaking – make a deposit into this fund. There would be no interest on it.

According to the plans, the shareholders of the non-profit Libra Association will receive a distribution on the reserve into which all Libra users have paid in. The experts Kirk Phillips and Adam B. Levine calculate that this will bring billions in profits from the interest on the money market fund to the members of the Libra Association.

With Libra as a private and digital currency, and with the tremendous market power and outreach of Facebook, we could see emerging a kind of creature that we should have prevented as a lesson from the 2008 financial crisis: a private player in the financial system who is too big and too powerful to fail because it would cause even greater damage worldwide. It is precisely this so-called systemic risk that could significantly increase by allowing a new digital currency Libra.

After all, a company that is already too powerful is gaining even more economic and financial influence – not only in private data but also in a core area of our economy: money.

It cannot be ruled out that Libra could repeat what happened with money market funds in the autumn of 2008: funds that investors around the world used without any problems for years could suddenly no longer keep their promises and had to be supported with billions in public money to save the world economic system. The governments’ promise was to prevent such a situation from recurring. This will only be possible if Libra’s introduction can be stopped.

This is not about blocking technological progress; it is about blocking a dangerous money project. Which is exactly what Libra is: the dangers of a private and digital currency for all of us cannot be overlooked. It is about the protection of our personal data, the security of our money and the stability of our economy. Private monopolies may offer Facebook & Co. the opportunity to make a lot of money, but they are an enormous risk for everyone else.

For Finanzwende and Finance Watch it is therefore clear: Libra must be stopped! Now!

Demand EU policymakers to stop Libra before it is too late.