Today, more and more people are taking out personal loans, many of them to meet everyday expenses or financial hardship. With loans increasingly designed to exploit customers through complex or unfair terms, this is becoming a problem.  Even worse, the most vulnerable people may only have access to the most exploitative loans.

A vulnerable consumer is someone who, due to their personal circumstances, is especially susceptible to detriment, particularly when a firm is not acting with appropriate levels of care. Low income households are the most predominant category of consumers affected by the dangers associated with consumer credit, in particular the short-term loans they use to make ends meet.

The key elements identified as leading to dangerous consumer credit and over-indebtedness come from market failures:

The main disadvantage of using such loans is the cost to consumers who fail to pay off their entire balance every month and continue to accrue additional interest charges from month to month. Some loans are designed in such way that most of their users are trapped in a cycle of never-ending loan debt. This is particularly the case of many payday loans, but also of some revolving credit and unarranged overdrafts: the profit making on this client segment is much higher.

How can one justify that vulnerable households are victims of irresponsible lending?

Some take the view that access to credit should be one of our fundamental rights. For instance, the Nobel Prize Laureate M. Yunus considers that credit is an effective way out of poverty and should be a human right. Is this approach also valid for consumer loans?

The argument for a right to credit is not restricted to advocates of the microfinance movement. In UK, even the payday lending sector has tried to recast itself as being on the side of vulnerable consumers arguing that to limit its activities denies consumers their ‘right’ of access to credit. Some consumer advocates are also of the view that adopting too strict rules, such as capping interest rates, could push vulnerable consumers into grey or black markets because they cannot do without loans.

It is worth noting that in some countries, the right to credit does not exist due to the principle of contractual freedom. This goes very far, maybe too far, because a lender denying a credit loan has no duty to give reasons for their decision.

As demonstrated by researchers and widely by debt advice practitioners, the question of a “right to credit” inevitably comes up against the other major credit issue: the risk of over-indebtedness.

Rather than trying to limit the damages caused by the lenders who extort money from their least well-off clients by regulating some of their practices, would it not be more useful to address the causes of financial difficulties faced by households that use short-term credit on a regular basis to supplement low pay and cope with a high cost of living? It would then be possible to implement effective measures to deal with these difficulties on one hand, and define the outline of a true “right to suitable and affordable credit” on the other hand.

WHAT SHOULD BE DONE AT EU LEVEL TO TACKLE DANGEROUS CONSUMER CREDIT?

Revising the Consumer Credit Directive (CCD) adopted in 2008 is an opportunity to address loopholes in current EU borrower protection law. In particular, the directive should be amended to:

Enhancing supervision of lenders and enforcement of the law

Read more
In a new paper, Finance Watch analyses consumer credit from an historical perspective, showing how different societies have tackled the problem at different times. 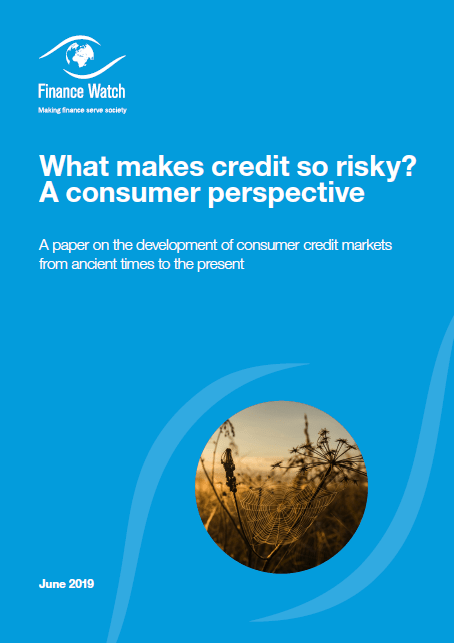 What makes credit so risky? A consumer perspective

Finance Watch’s research paper on consumer credit and its contribution to over-indebtedness.

Which financial services are needed for financial inclusion?